Hey folks, here’s what made the month in Lucca’s tech watch this October.

On the “political” side of things, October was a rough month for the .net ecosystem. 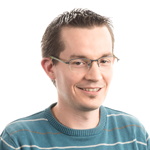